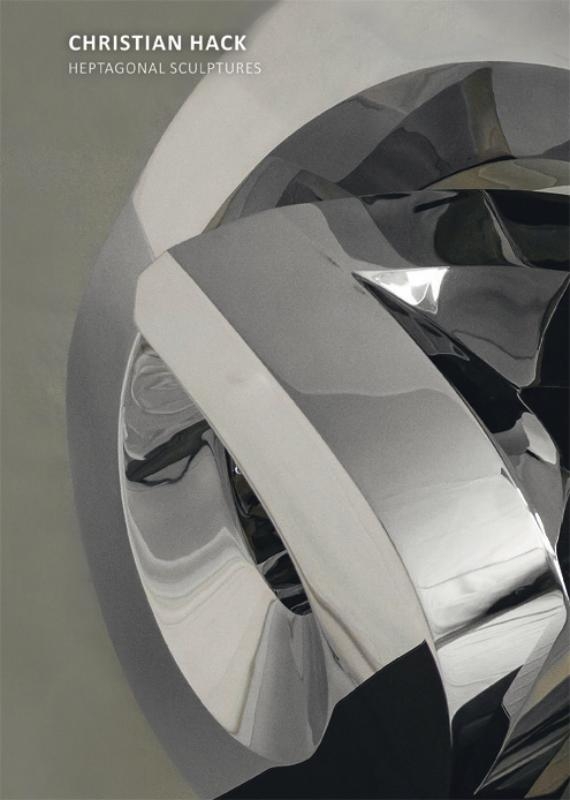 Even in his early work, which I first experienced when I visited his studio in 1994, you can find the origin for what are now his actual heptagonal sculptures (seven sided). To develop an artist’s own distinct signature is a lifelong process and has many forks in the road. Christian Hack’s determination to find his way is both, relentless and admirable. This book shows an incredibly creative and energetic sculptor who has found his ‘voice‘ and is not about to stop.
Looking at his work in Plexiglass which he made during his studies at the renowned Folkwang Schule in Essen, Germany (1971-1976), you can see his initial fascination with light and reflection. Now, his current polished stainless steel sculptures can be aesthetically pleasing and at the same time reflecting our surroundings and playing with our own reflections.
His work in the nineties in bronze and cast-iron would prove to be invaluable for his later understanding of material, surface and reflection. It taught him how to work from a drawing or a plaster model and turn it into an actual sculpture. His fascination for Spanish sculptor Julio Gonzalez (1876-1942) would help him find his direction and teach him how to dissect his own sculptures. Choosing the best element or feature and building on from there; reducing, condensing, creating his archive of ‘white models‘ which would later prove to be the basis for infinite new sculptures.
In 2001 the Basque sculptor, Eduardo Chillida (1924-2002) would inspire him to even further reduce his form language and create the possibility to work with simpler materials on a larger scale. In the next ten years small bronzes would evolve into monumental Corten-steel sculptures for the public space.
In 2013 a renewed interest in his ‘old’ seven and five sided forms (to be part of an exhibition in Dubai) inspired Christian Hack to review some of his older works and found himself “beflügelt” - on wings - to pick up where he had left off at the end of the nineties and completely focus on this rediscovered form language.
Now, after many years of experiencing how to translate his ideas and models in “lighter” materials like aluminium and stainless steel, Christian Hack has the exhilarating feeling that even technically there is no end to his possibilities. “Von der Kleinform bis zur Megaform, alles ist möglich”, from small to mega size - everything is possible.
Every new design, every new model surprises him, making him more confident that he finally has found his very own, unique way of expression. His perseverance and trust in this lifelong process with many forks in the road, which seemed to have their own logic, finally paid off.