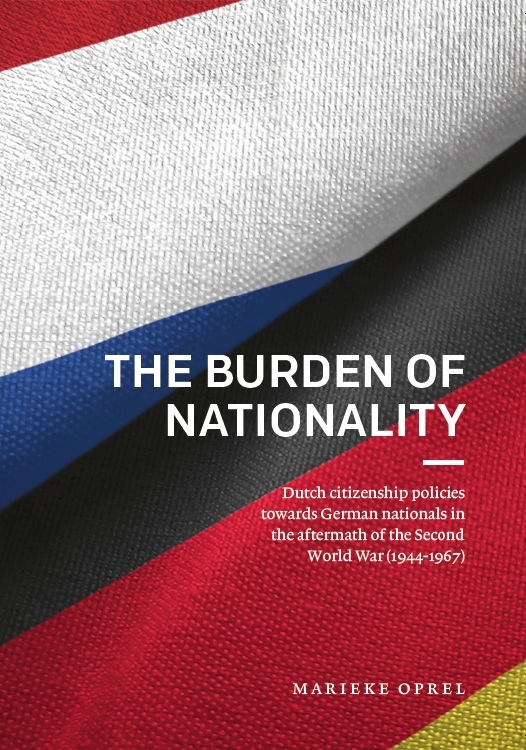 Marieke Oprel
The Burden of Nationality
Dutch citizenship policies towards German nationals in the aftermath of the Second World War (1944-1967)
€ 39.95
Levertijd: 1 tot 2 werkdagen

On 20 October 1944, anticipating the end of the Second World War, the Dutch government-in-exile in London promulgated het Besluit Vijandelijk Vermogen (`the Decree on Enemy Property`). The Decree classed al nationals of Germany, Italy and Japan as enemies of the state, or vijandelijke onderdanen (`enemy citizens`), and entitled the Dutch State to confiscate all assets belonging to enemy citizens within the Kingdom of the Netherlands. Thousands of German civilians who resided and worked in the Netherlands were stripped of their assets, regardless of their place of residence or political allegiance and without any Dutch compensation. Some were arrested, imprisoned or expelled, whereas others left the Netherlands of their own accord. Even German Jewish refugees, who had been deprived of their German citizenship by the Nazis, were treated as enemy citizens.

Many tried to appeal their status of enemy citizen by submitting a request for an ontvijandingsverklaring (`declaration of de-enemisation`), with the hope of gaining their rights and assets back.

Offering a multi-faceted overview of the history of German enemy citizens by highlighting the different actors, stakeholders and institutions that defined, implemented or challenged the Decree on Enemy Property, The Burden of Nationality sheds light on a forgotten page in the book of Dutch post-war history. It examines the categorical classification of Germans as enemy citizens in the aftermath of the Second World War and analyses how in times of conflict, post-conflict and transition notions of citizenship are key criteria for solving quandaries of identity and nationality. Interviews with children and grandchildren of former enemy citizens highlight how the effects of enemy status impacted generations.

As this study shows, the question of how the politics of citizenship informed the treatment of German nationals illuminates a fundamental dilemma and a deep ambiguity regarding what makes someone a Dutch citizen.

Marieke Oprel (1990) is an interdisciplinary historian, lecturer and organiser. She studied political and cultural history at Vrije Universiteit (VU) Amsterdam. Her dissertation research on German enemy citizens in the Netherlands in the aftermath of the Second World War, which resulted in The Burden of Nationality, was funded by the Netherlands Organisation for Scientific Research (NWO). Full details on her CV and publications can be found on www.mariekeoprel.nl.