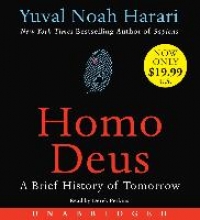 In Homo Deus, Yuval Noah Harari examines humanity`s future, offering a vision of tomorrow that at first seems incomprehensible but soon looks undeniable: humanity will soon lose not only its dominance, but its very meaning.

Over the past century, humankind has managed to turn the uncontrollable forces of nature--namely, famine, plague, and war--into manageable challenges. Homo Deus explores the projects, dreams, and nightmares that will shape the twenty-first century, from overcoming death to creating artificial life. But the pursuit of these very goals may ultimately render most human beings superfluous. We cannot stop the march of history, but we can influence its direction.

Future-casting typically assumes that tomorrow will look much like today: we will possess amazing new technologies, but old humanist values like liberty and equality will still guide us. Homo Deus dismantles these assumptions and opens our eyes to a vast range of alternative possibilities, with provocative arguments:

- The main products of the twenty-first-century economy will be bodies, brains, and minds.

- The way humans have treated animals is a good indicator for how upgraded humans will treat us.

- Democracy and the free market will both collapse and authority will shift from individual humans to networked algorithms.

- Humans won`t fight machines; they will merge with them. We are heading toward marriage rather than war.

This is the next stage of evolution. This is Homo Deus.