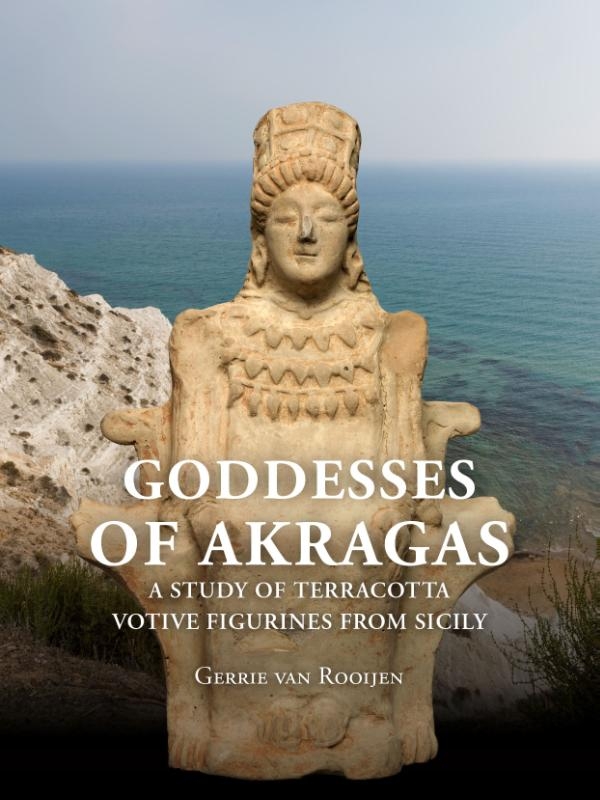 The terracotta figurines from Akragas (Agrigento) with their chubby faces, splendid furniture, and rich adornments, depict a prosperous life in the late sixth and early fifth century BCE. The extensive jewellery on the figurines contains strikingly large fibulae appliques fastening pectoral chains with several sorts of pendants. They are modelled after existing items. The form of the jewellery items changed fast, influenced by different peoples and changing fashions, which can be compared with representations of jewellery and fashion on coins of the same period from Syracuse.

In contrast, the body of the figurines remained armless and abstract for some time, nor does it express its gender. The block shaped, sloping upper body might have originated with aniconic objects, but suggests here a seated person, covered with a rectangular apron on the front. In contrast, the face is detailed, and often crowned with a specific headgear, the polos. The Archaic smile reveals Greek influence on its features.

An archaeological experiment in which figurines and moulds were reproduced revealed their production process. By combining data from the experiment with an analysis of their iconographic features, most of the figurines studied can be shown to have been designed and produced locally. The moulding technique, introduced by newcomers to the city, provided for relatively cheap and rapid production of terracotta figurines. Local clay and marl are found near to the city, and its composition was found to be very suitable, due to its plasticity, fine structure and soft tone on firing.

Wooden figurines, the forerunners of the terracotta figurines, were used in the production of the moulds of their terracotta successors. The terracotta figurines developed to become more three-dimensional, so that they were able to stay upright unsupported. Objects and moulds were exchanged with the city of Selinous, resulting in variations of the standard and figurines with finely detailed faces.

Designing and dedicating these votive figurines, and possibly also jewellery, to a cult statue might have acted as a unifying element for the perhaps multi-ethnic society of Akragas. By means of these anthropomorphic female figurines, people gave shape to their origin and narratives, using old and new symbols such as the Phoenician crescent and the Greek satyr. Their cultural influences formed a new religious setting, helping to forge a new identity unique to Sicily. The prosperity expressed by these metal adornments, fits Diodorus Siculus’ description of Akragas as a rich city.

I Akragantine figurines and their context
I.1 Introduction
I.2 State of research
I.2.a Identifying the figurine and the dedicants
I.2.b Proving literature right by the archaeological material
I.2.b.i Cult transfer and a prototype reconstruction
I.2.c Athena Lindia? Rhodian and Sicilian figurines compared
I.2.d Other views on identification and origin
I.2.e Oikist cult and cultural identity formation
I.2.f Intermarriage and gender
I.3 Aims and research questions
I.4 Method and archaeological theory
I.5 Research structure
I.6 Greek historiography on Sicily – some general remarks
I.6.a Mythical past
I.6.b Political setting
I.6.b.i The perception of ancient authors
I.6.b.ii Sicily in the account of Thucydides
I.6.b.iii The foundation of Gelas and Akragas
I.6.b.iii.1 Gelas
I.6.b.iii.2 Herodotus on Gelas
I.6.b.iii.3 Akragas
I.6.b.iii.4 Herodotus on Theron of Akragas
I.6.c Social and economic setting
I.6.c.i Diversity among the inhabitants of Sicily
I.6.c.ii Phoenicians
I.6.c.iii Prosperity of Akragas
I.6.d Religious setting
I.6.d.i Demeter and Persephone on Sicily
I.6.d.ii Temple building and politics
I.6.e Conclusions on the ancient literary sources

III The technology of Akragantine figurines
III.1 Introduction
III.2 Aims of technical research
III.3 Method: An archaeological experiment with analogue reconstruction
III.4 Interpretation and the chaîne opératoire approach
III.5 The general production process
III.5.a Object categories
III.5.b Solid objects and plaques
III.5.c Description of the steps in the production process
III.6 The coroplastic experiment
III.7 Results of the experiment and comparison with features of the original objects
III.7.a Step 1: The clays used in Akragas
III.7.b Steps 2 and 3: Choice of patrix and creating the matrix
III.7.c Step 4: Aspects of the shaping process and related items
III.7.c.i Making the front of the figurine
III.7.c.ii Making the back of the figurine
III.7.c.iii Making an extra rim
III.7.c.iv Drying and deformation
III.7.c.v The derivative mould
III.7.c.vi Time management and additions
III.7.c.vii Retouching and tools
III.8 The production of other types of objects
III.9 Interpretation and discussion
III.9.a Implications of the introduction of the moulding technique
III.10 Identification of coroplastic workshops by different techniques
III.10.a The Workshop of the White Clay
III.10.b The Workshop of the Convex Back
III.10.c The Workshop of Straight Reworking
III.10.d The Workshop of the Chubby Faces and the One Pendant Necklace
III.10.e The skills of the coroplast
III.11 The coroplastic exchange between Sicilian towns
III.11.a Terracotta production at the kerameikos of Selinous and workshops in Akragas
III.12 Conclusions