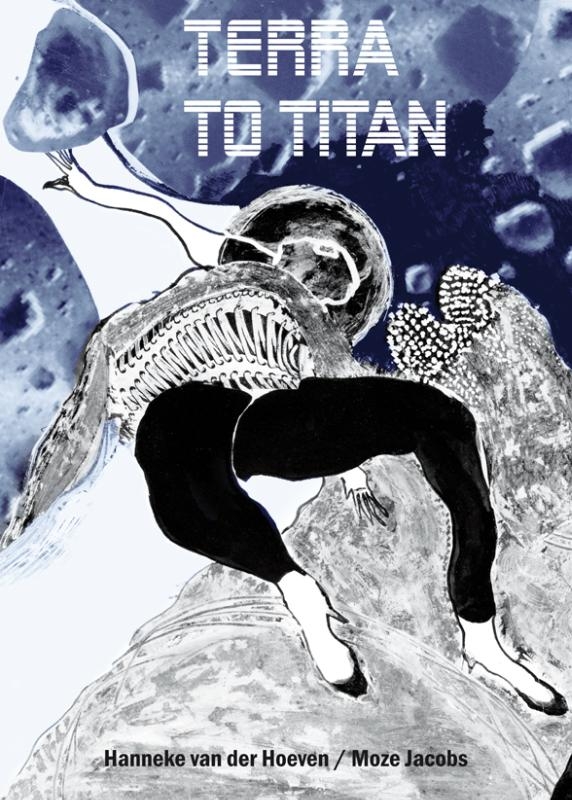 The astronaut and scientific telepath Raia Solanis (Gondwana, 2257) from Australasia makes first contact as the official representative of (wo)mankind with an extraterrestrial species that lives on Saturn`s largest moon, Titan. With a local guide, Fivetwenty, she descends to Titan, where she takes cognizance of the rituals and customs of the inhabitants, who live in symbiosis with their celestial body. Raia refers to them (they speak in imagery) as Scaridae, for they fully change gender, similar to the parrotfish on Earth. The negative part of her dualist mind takes its toll, eventually, as she is dispatched mildly albeit resolutely. Game over?

Hanneke van der Hoeven (visuals) and Moze M. Jacobs (texts) published four serials and a graphic novel in weekly and monthly magazines (Primeur, Groene Amsterdammer, Milieudefensie) when they were both living in Amsterdam in the 1990s. They resumed their collaboration online from West Cork (Ireland) and Berlin/Amsterdam in the early 21st century, after a long hiatus. This resulted in Terra to Titan, their first science fiction graphic novel. Comes with a soundtrack.

Hanneke van der Hoeven is an artist and painter. A lot of her work is autonomous (drawings, collages, graphic novels, comics, artists` books, her own pictorial novels) whereas she also illustrates books by others, including Edward van de Vendel (their Gijsbrecht won a Dutch literature award for 12- to 15-year olds) and German multitasker, Thomas J. Hauck. Together with corn.elius she is the moving force behind artbook.berlin, an international fair that has been held in Berlin since 2012.

Moze M. Jacobs was an author and journalist (for media such as Vrij Nederland, Opzij, VPRO) in the Netherlands before moving to rural Ireland in 1997, where she worked as a translator (Dut/Eng & Eng/Dut) while continuing to write fiction and poetry. She regularly participates in (international) art projects, (be)spoken word events, radio, and environmental action as a writer/organiser.